Back in the Saddle

December 09, 2006
It seems like it has been years since I last posted. I have been knitting, but nothing particularly noteworthy. I used the leftover yarn from my co-worker's hat to make a scarf for her. I neglected to take a picture of it, however. It was just simple stripes--nothing innovative. It is pretty, though, and she likes it a lot

I got a started on that felted wreath from Knit Simple, but I lost steam when I realized that the yardages given in the pattern are incorrect and that I'll probably need to buy more yarn. That demoralized me so much that I've set it aside for the time being. I intend to finish it, but it won't be ready until Christmas 2007. I can work on all those small pieces next summer, when it's too hot to work on a big project.

Another co-worker has commissioned a long, skinny Moebius strip scarf, and we're going to try to find yarn for it next Tuesday during our lunch hour, but until then I've just been working on some small, random stuff to sell (e.g., baby hats and scarves). I'm just not in the mood to tackle anything big. I'm feeling uninspired right now. Maybe it's just because I've been focused on getting ready for my big annual holiday potluck tonight. Once it's over, I'll be able to think about knitting again.

Enjoy the weekend, and keep on knitting!

Angie said…
Hope you had a great time .I can guess what a potluck is . I can't concentrate on knitting but I must get at least two more scarves made before Christmas.
December 10, 2006 2:21 PM

I'm done shopping for Christmas gifts for my nephew. I got him three books (The Snowy Day by Ezra Jack Keats, The Mitten by Jan Brett, and Winter in White by Robert Sabuda), a children's Nativity set, and a T-shirt from Threadless. Of course, I also had to knit him something. I decided that every child needs at least one pair of red mittens.


The pattern is from The Knitter's Handy Book of Patterns by Ann Budd. If I haven't mentioned it before, I lurrrrrve this book and think every knitter should own it. It's an invaluable resource. The yarn is Paton's Merino Classic, which is another great resource. It's a lovely, soft, but hard-wearing basic yarn. I use it all kinds of projects. I used size 6 dpns at a guage of 4 stitches per inch; I made the smallest size, so it was only 22 stitches around each mitten. They took no time at all, and I'm very pleased with the results.

In other Christmas knitting, I'll probably do another pair of socks for my sister. M… 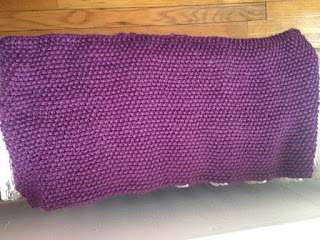 So I did not do much Christmas knitting this year. I moved to a new apartment in November and I've been busy getting my old condo fixed up to sell, so my knitting time has been seriously curtailed. I did manage to make a seed stitch cowl for a dear friend.

The yarn is a silk, wool, and alpaca blend from Knit Crate. As soon as I saw that rich purple color, I knew I had to make something for this friend. Purple is one of her favorite colors. The cowl looks great on her, too.

I hope you and yours are having a lovely holiday season, no matter what or how you celebrate. Until 2020!