December 03, 2009
I suppose the subtitle of this post should be "Sometimes There's No Shame in Taking the Path of Least Resistance." This stocking is adapted from the pattern in the second Mason-Dixon Knitting book. The original has an argyle section, a Fair Isle snowflake section, and a small striped section. Well, I started making the snowflake, but when it became apparent that, because of the extremely long gaps between colors, I would end up cutting yarn and weaving in ends on almost EVERY row, I gave up and made the all-striped version. 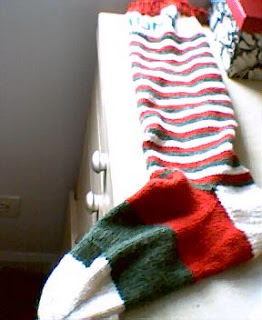 Besides, my nephew is just 2 years old and won't care what the stocking looks like anyway. I do hope that it becomes a keepsake when he's older, but for now, I know he'll be more interested in what's inside the stocking than anything else. Which is as it should be.

Part 3 of Handmade Christmas next week.

Lynette said…
it looks wonderful. i remember when you cast on for your nephew's stocking. great job! you're right - he won't know the difference one bit. just make sure it gets filled with goodies.
December 03, 2009 8:20 PM