Three Down and...Two More to Go

April 09, 2011
I thought I was done knitting baby gifts, but apparently this really is the Year of (Breeding Like) the Rabbit, because two more friends just told me they're pregnant. One is due in October and the other in December. Wow. Guess I know what I'll be doing for the next couple of months. Anyway, last night I finished the bibs for the little boy who is due in June (except for sewing on the buttons). 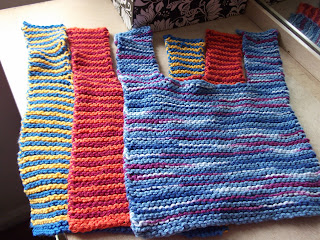 It's just as well that I have more baby stuff to make, because I'm having trouble with that cashmere laceweight yarn I mentioned in my previous post. I've cast on with 3 different needles and have tried 4 different patterns with it, and it just isn't working. The yarn is very slippery and my needles aren't sharp enough, and it's just a big old headache. I'm starting to think the yarn just doesn't want to be knit. So I'm going to set it aside for now and just crank out baby bibs in hopes of staying ahead of the breeding curve.

I also bought some luxury sock yarn week before last. I don't need more sock yarn but it was gorgeous and I had a $10 gift certificate. 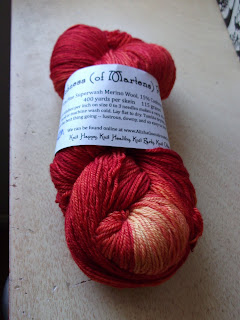 I doubt that I will actually makes socks out of it, because it's too beautiful to be stuck in a pair of shoes, but it will make a beautiful scarf or pair of gloves.