October 22, 2011
Once again, I knit these scarves weeks ago but just now am getting around to posting the pictures. I'm a slacker, I know.

First, I found a skein of teal Berroco Zen (which, sadly, has been discontinued--it was a beautiful ribbon yarn) in my stash and decided to make a scarf for a friend's birthday. I used really big needles and cast on just 10 stitches to make a long, skinny, lacy scarf. She was thrilled when I gave it to her. 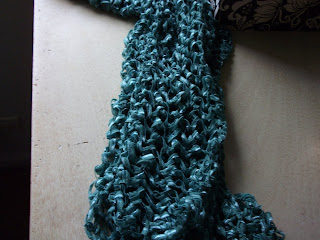 Back on September 24, I went with a couple of friends to the Chicago Yarn Con at the Pulaski Park field house. Naturally, I had to buy something, but I was very restrained and bought only 2 skeins. One of the skeins had just 62 yards, so I decided to make a cowl out of it. I cast on just 75 stitches, but somehow it ended up long and skinny instead of, well, a cowl. 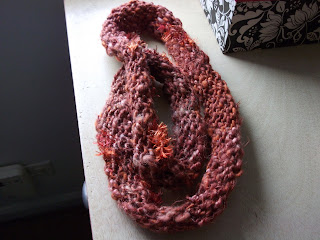 It's fine. I can wrap it around my neck twice, but it's not what I had in mind. If the yarn were smoother, I would rip it out and start over, but it's one of those novelty yarns that just comes apart if you try to rip it. It's my own fault for not doing a gauge swatch.

I'm still working on that sweater/vest for myself. When I get the body done, I'll post a picture. I need to get busy on it. It's cold here, and I could really use a good sweater.

Lynette said…
the scarf turned out great. and the cowl looks wonderful. i remember that yarn - it reminds me of the falling leaves.
October 23, 2011 12:31 PM