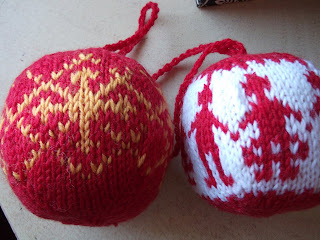 The one on the left is the Greek Cross, and the one on the right is called "Dancing Around the Tree." Apparently, the dancing one is based on the original ball that Arne & Carlos designed for Comme des Garcons a few years ago, which led to the idea for them to do their book.

I have a third ball knitted but it isn't stuffed yet. No joke--it takes almost as long to stuff them as it does to knit them. Anyway, when I get that one stuffed, I'll post a picture. And I've already decided which one I'm going to knit next. Christmas doesn't officially end until January 6, with the Feast of the Epiphany, so I plan to churn out as many Christmas balls as possible until then. After that I'll try to knock out a pair of socks or two in time for the February campaign for Afghans for Afghans.