March 02, 2013
Yes, I know that spring is almost here, but I love earth tones and circle scarves (or cowls, if you want to get fancy about it), so I kind of had to make this one. Also, after those complicated mittens, I wanted something very easy and simple, to cleanse the palate, if you will. 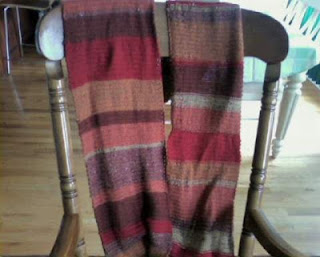 I cast on 54 stitches and kept knitting until I was pretty much out of yarn. The stripe pattern isn't entirely random. I like odd numbers, so each stripe is 1, 3, 5, 7, or 9 garter ridges. To finish it, I picked up stitches along the cast-on edge and used the 3-needle bind-off, rather than sewing the 2 ends togetehr. That's it! Other than having to weave in a million ends, it was a fun project.

I'm taking a class later today with Monica and Lynette on the Twigg stitch, taught by Vicki Twigg herself. The first half of the class was last week, and it blew my mind. I'm very excited to learn a completely new technique and do some projects using it.